It can be difficult, particularly when you’re new to an area, to find a restaurant which serves genuinely delicious Italian cuisine… and it’s an even greater rarity to find one such restaurant which prides itself as much on its architecture as its menu. With several Awards of Excellence from Wine Spectator Magazine starting from the year 1992, a write-up of one of their selections in Gourmet Magazine, a wine containing over 370 selections, numerous positive reviews from acclaimed food critics and standard customers alike, an article devoted to it in the Sacramento Bee, and a glowing mention in Kate Chynoweth’s novel “The Best Places to Kiss in Northern California: A Romantic Travel Guide,” Café Fiore is a restaurant which irrefutably falls into both of those categories– in addition to being one restaurant we are particularly proud to include on our list of participants in this year’s Sample the Sierra Festival.

Purchased in 1986 by Nick E. Ashmore, an architect, the restaurant has been known equally for its design and for its food in the years since it began. The decor alone is often praised as being tastefully arranged, its colors creating a relaxing atmosphere and the placement of its furniture making for a particularly pleasant dining experience. It brags of chic dining furniture and a classy Volare Modern White Floating Glass Vanity w/ Mirror in the washrooms, which immensely adds to the aesthetics of the place. Even in 19996, the Sacramento Bee’s Allen O. Pierleoni mentioned that the 7 indoor tables at Café Fiore are so well-placed as to make it “…rather ironic that conversant diners enjoy more a sense of privacy here than in many larger dining rooms.” In the many years following this review, customer opinion has hardly changed. Many reviews submitted to the restaurant praise its intimate atmosphere, expressing their desire to eat there a second time as much because of how comfortable they felt as because of how delicious their meal was.

Service and food quality are, in fact, just as frequently and exuberantly praised as the ambiance of Café Fiore. 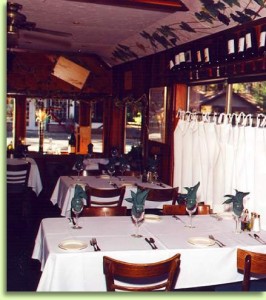 Some have placed the quality of this small restaurant’s service above many of their own favorite dining establishments, claiming that the restaurants they loved had highly remarkable service, and yet they found that Café Fiore was in a class of its own in that category. The menu of this much-demanded restaurant is often enthused about in reviews as well. The high-quality Italian foods offered often surprise new customers with the success of their preparation, and there are many regulars to the restaurant who eagerly anticipate their next meal at Café Fiore simply due to their desire for one or more of the homemade desserts which have never failed to gain adoration from both children and adults over the years. Tying all of these famous and successful features together, Café Fiore also boasts one of the largest and most delicious wine lists in South Lake Tahoe. Whether for its food or for its wine, Café Fiore is a near-ideal fit for the Annual Sample the Sierra Festival and we certainly look forward to seeing them in attendance again this year.

Worn Out Welcome to headline Sample the Sierra live music

Are you excited for Lake Tahoe's largest farm-to-fork festival this Sept. 15th? Check out this…

The vendor pairings for the 6th Annual Sample the Sierra have been announced. Approximately 54 local…