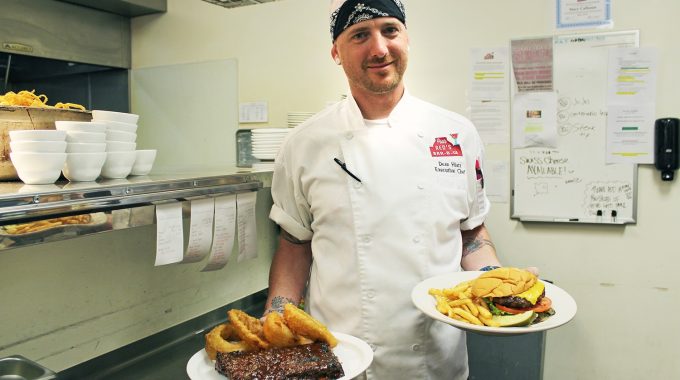 Dean Hiatt, 38, was born in Eureka in 1979 His family moved to Cameron Park when he was 2 years old. An avid outdoors man and snow sporter, Dean began skiing at Sierra Ski Ranch when he was 2 ½ years old. He grew up playing in the back dirt roads that dotted Eldorado County in the 1980’s. Dean would come home smelling of wild rosemary and sagebrush. He and his brother built forts in every tree they could climb, played baseball in Ponderosa Little League and fished Cameron Park Lake every chance he got. Growing up with his brother and raised by a single father who worked 2 jobs to support his sons meant sometimes fending for themselves for dinner. 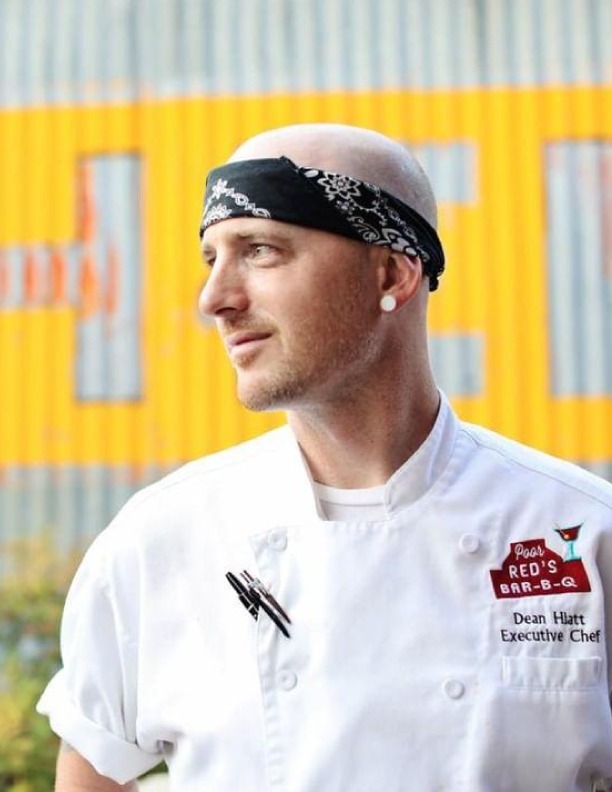 Dean’s father, John Hiatt, was an Eagle Scout with Troop 54 in Eureka. He founded and ran Telos Youth Outpost in the local community for 26 years. John would take his sons camping once a month for the better part of their youth. Places like Death Valley, Ghost Town Bodie and Point Reyes National Seashore were a yearly trek. John taught his sons how to fish, climb, canoe, backpack and explore the better part of Northern California. It was in this time and during these trips where cooking found Dean. “When you go hiking from Loon Lake to Lake Tahoe over 7 days, fresh food is not something you can go and buy. My father taught me about food that grew wild in the hills. People call this Farm To Fork these days. My father taught me about this 20 years before it became a buzzword and movement.”

Dean spent the better part of his adolescence hiking the local Sierras, climbing most of the ones you can see along highway 50 before he was 16. When Dean was 14, he showed his father a commercial about White water rafting. John loved the idea of taking Telos rafting. In return, John taught his son how to be a whitewater raft guide at age 16. “I love the outdoors, and just like the Sierras, if you pay attention to the details of nature, you’ll see things others don’t. Like the wild bay leaf trees that dot the banks on the South Fork American River Gorge, the wild blackberries and fennel, too.”

Dean Graduated from Oakridge High School class of 1998. He followed his boyhood dream of becoming a Firefighter, graduating from The Eldorado County Training Officers Association Fire Academy in April of 1999. “I’ve always wanted to a fireman. My father was a police officer and I loved the idea of public service. It’s always been in our family to give back through public service.” After a short stint at station 88 & 89 in Cameron Park, Dean felt he’d peaked and set his goals higher, much higher. “I loved the Fire service, but thought that if I was only 19, what else could I do if I set my mind to it?”

Dean left the fire department and to pursue music, a bug that bit him in high school. “I taught myself to play drums, banging on anything I could. I didn’t take lessons, but I would listen to the songs and dissect it by ear. I always told myself that if I could even try out for Blink-182 or Fenix-TX, (Early 2000’s worldwide, pop punk bands) I’ll consider myself a success.”  Dean did that just 2 years later. “I met the singer of Fenix-TX when they played a show at The Boardwalk in Orangevale and gave him my info, He called me a week later, asking me to come down and tryout for the band.”

After a few world wind years of playing music, being on MTV and enjoying the fanfare, Dean came back home to Cameron Park. He didn’t stay there long. All through the past years, Dean had worked as a cook in different local restaurants throughout the area. But he never thought of it as a career until he came home. Dean and some friends went to Las Vegas for a birthday and that’s where it hit him. “I LOVED Vegas, the food, the atmosphere, the options! I had cooked growing up, but until I saw the Vegas, I never thought of food as a career.” Dean moved to Vegas in early 2008, this is where he really honed his craft. He got a Job at David Burke, a celebrity chef from New York, also known for his appearance on Iron Chef. Dean Worked his way up to Sous Chef at the restaurant in The Venetian. Dean also cut his teeth across the strip at Diablo’s, an open air, 2 story Mexican cantina. Dean rubbed shoulders with A-list celebrities and personally cooked for some of the world’s most famous celebs and sports athletes. Including John Elway, Paris Hilton, the Prince of Dubai, David Tyree and others. “I really learned about food, how things pair, flavors, and what we call “life.” That’s the way the food flavors come alive and pop, not just on your palette, but also on your plate. Vegas was eye opening, quite the experience!”

After spending some time in Vegas, he got a call from his father that would change his culinary direction. “My dad called and told me he was closing Telos. That was his lifelong dream, he wrote his college thesis on that idea. Having him call and tell me he was closing hit me probably harder than it hit him. I left everything in Vegas and came back home before the week ended. He always taught us that if we don’t have family, we had nothing. It wasn’t even a tough decision to come home.”

After Dean came home and helped close the family business, he worked at a few local places to keep money coming in. “I worked at a few places in town, but nothing like that of Vegas.” That was until he got a call from local chef, Michael Williams. Michael was opening Pause lounge and Kitchen in Roseville and wanted to tap Dean to be his Sous chef.” Pause was a little ahead of it’s time for the area. It was complete head to tail cooking, 98% from scratch and even did reverse farming. This is where instead of going to the farm and picking what you want to work with, they call you and ask, “What can we grow for you this season?” It was something that even Vegas wasn’t doing.” Chef Michael and Dean opened Pause December 2009. It opened up to great fanfare, lots of local support. “I became pretty good friends with former San Francisco Coach Dusty Baker. We’d spend time talking about the food I made there, my friends that he wanted to place on his team and how he was familiar with my father’s former line of work. He was raised along the lines of Telos and was happy to hear that children of less fortunate circumstances still had options available to them.

The owners of Pause had never run a restaurant before. They quickly learned that partnerships don’t always go well. After a year, Pause owners and investors had a falling out, leaving Dean looking for more opportunities to work on his craft. 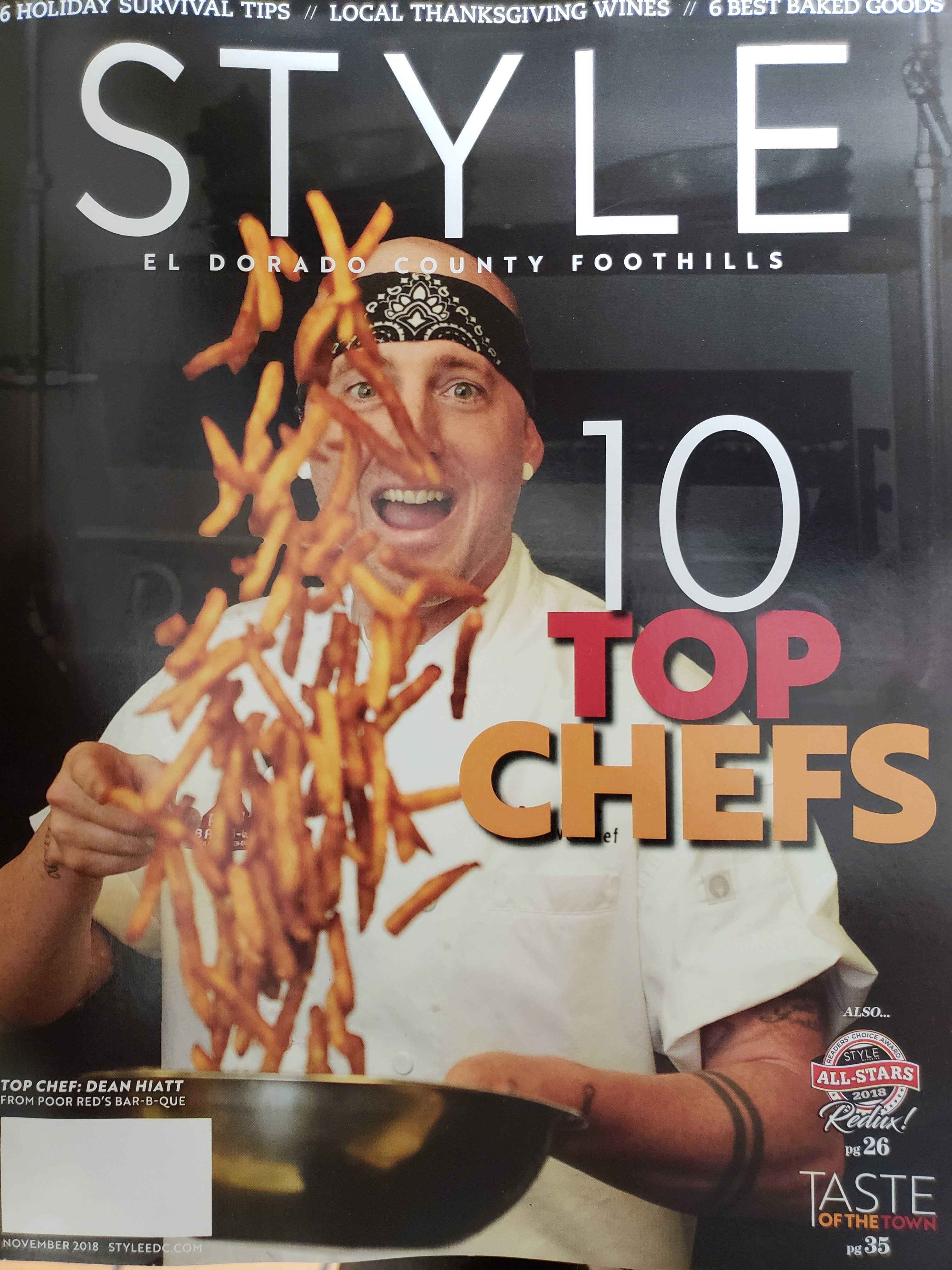 Dean went on to open Firestone Public House in Midtown Sacramento as their Executive Sous Chef. This is where he got his first magazine cover (Sacramento Magazine Feb 2012) “It was a great spot, always busy, had a bit of that Vegas vibe as there was always someone walking in” Dean was able to cook multiple times for Mayor Johnson as he had late night meetings there to first, keep the Sacramento kings in town and later to get financing for the new Kings Arena. Continuing the line of cheffing for celebs, Dean added a few more celebs to his knife history. “I had many Kings players come in, but having Jeremy Lin and Dirk Nowitzki in were pretty cool. I’ve been a big fan of theirs.”  Dean also took the opportunity to join David Bazirgan in San Francisco’s Presidio for a one-night gala, raising $25k in one night by doing a very high end, upscale full dinner. “I try to stick to what my father taught us, give back when you can. This was an opportunity I couldn’t pass up.”

After 2 years, Dean wanted to up his culinary prowess, he staged (French for kitchen tryout) and 2 Sacramento landmark restaurants- The kitchen & The Old Firehouse. Both offered him a position. “I went with the Firehouse because I wanted to learn the whole aspect of the restaurant- from food to wine to service.” This decision would later hold to be a very impressive one for Dean. “We had the Food Network come to town for a contest they were filming. I believe it was called “Best Fine Dining Sacramento.” They spent an hour and a half at Ella and The kitchen. But when they came to our place, they stayed for 3 hours and loved every single thing. We were crowned the Winner and I hold that close to my chest. I turned down the Kitchen, this contest solidified my decision as being the right one to take.”

After a year under his belt, Dean wanted to get back to him home, Eldorado County. The timing for Poor red’s couldn’t have been more perfect. After a long process and investment, Dean Hiatt is back home and bringing his 19 years of experience up the hill, to help raise the phoenix we all know as Poor Red’s. “I’m excited, I’m from here, went to school here, played in the woods here, baseball, hiking fishing, all of it I’ve done here. Being able to now help revitalize a local landmark is bittersweet. I’m looking forward to opening day, for a chance to let the community have their baby back. You never know, maybe we’ll see Chuck Norris in our bar again. I guess you’ll have to come in and find out.”

Dean has been voted as one of the top Chefs of Eldorado County the past two years.  He has helped Poor Red’s win over 19 awards during that same time. Making Poor Red’s the most award-winning restaurant in the entire county. Chef Dean was asked to be the anchor, course 5, for Eldorado’s Farm to Pork event in June of this year. Feeding over 250 people and working alongside other great chefs from our community.

If there was a single word which could describe C.G. Di Arie, it would be…

Turning Five at a New Location