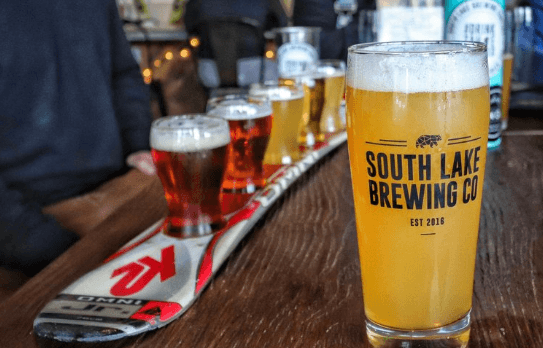 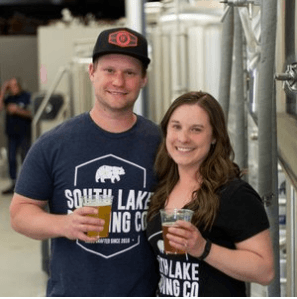 The idea to open South Lake Brewing Company came naturally from Chris and Nicole’s passion and love of Lake Tahoe. In 2009, at college on the Central Coast, Chris was first introduced to homebrewing and eventually got a job in the craft beer industry. During one of their many visits to a favorite craft beer bar, Chris and Nicole dreamed up the idea to open a brewery. Inspired by the beauty, adventure, and community of their mountain hometown – it only seemed natural to start this dream in South Lake Tahoe.

For the last several years Chris and Nicole have taken their idea, their dream, and made it into South Lake Brewing Company. In the Fall of 2015, they moved from Southern California back to their hometown to start establishing the roots of SLBC and dive deeper into the craft beer community. It took two more years, but in April 2017 – the doors of their brewery finally opened!

With up to 15 craft beers of tap, South Lake Brewing Co. offers a variety of beer styles capable of satisfying any beer drinker whether you are a craft beer lover or just exploring. Their production area currently comprises of a 10 barrel brewhouse, five 20 barrel fermentation tanks, and four 10 barrel fermentation tanks. Their brew system allows us to keep a full tap list in the tasting room, while distributing to bars and restaurants around town and outside of the Lake Tahoe Basin. If you’re looking to grab some tasty SLBC brews, grab your tickets to Sample the Sierra, where their tasty brew will be paired with Chicken a Barrel.

Sierra Oaks Estates winery is dedicated to small-lot handcrafted wine.  The winery is located in…

Sample the Sierra will showcase more than 20 artists and artisans, celebrating not just food…