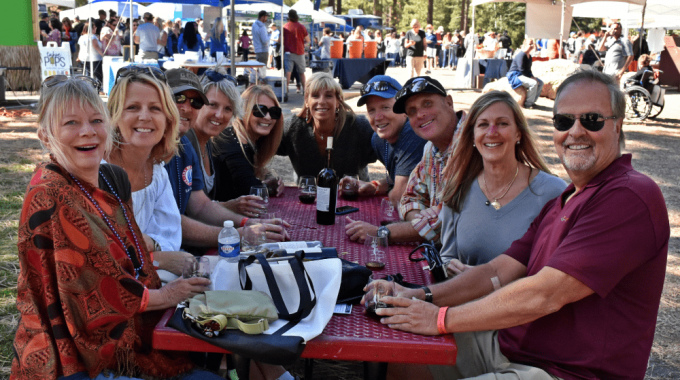 The popular event now in its 12th year will be held from 3-7 p.m. Sept. 18, at Bijou Community Park and will feature foodie event showcases, regional cuisine, wines, spirits, beers, as well as artisans and live music.

Attendance will be limited to approximately half of previous years, to provide a more intimate atmosphere with ample space to sample and imbibe. Tickets are $75 for adults and $65 for under 21 and designated drivers and are available online here.

“We’re looking forward to raising glasses together in person once again and wanted to make this year more exclusive to allow for more room to mingle, sip and sample,” said Emily Abernathy, director of operations at the Tahoe Chamber in a press release. “We wanted to spice up the event with a chic cocktail, late-afternoon/evening ambiance. Sample the Sierra allows us to cheer and applaud our regional establishments who had to constantly pivot and shift operations during a challenging year.”

The culinary adventure will include more than 20 booths featuring a different winery, distillery or brewery expertly paired with a restaurant utilizing local produce in signature dishes.

Food and drink purveyors will be updated online in the coming weeks as well as pairings announcements. Attendees can take home their favorite vintages by purchasing directly at the Wine Tent Sales benefitting various local non-profits.

Sample the Sierra began as a geotourism initiative by the Lake Tahoe South Shore Chamber of Commerce (Tahoe Chamber) with El Dorado County and the Lake Tahoe Visitors Authority to promote the bounty and heritage of the region. It has grown into a sold-out festival that attracts residents, foodies, and international visitors alike.

For 12 years attendees have tasted their way through the unique and popular flavors of the Sierra Nevada via wine, spirits, beer and cuisine created from local sources. (2020 was virtual, take-out and online shopping.) The festival and the area’s expanding food scene has morphed since its 2010 inception.

Get your Sample the Sierra tickets here.

Sample the Sierra is officially returning as an in person event on Saturday, September 18,…

Chef Kristina is a Chef at Hard Rock Hotel and Casino Lake Tahoe. She a newcomer to the…

Located in the Town of El Dorado, on the original Lincoln Highway, and the Pony…